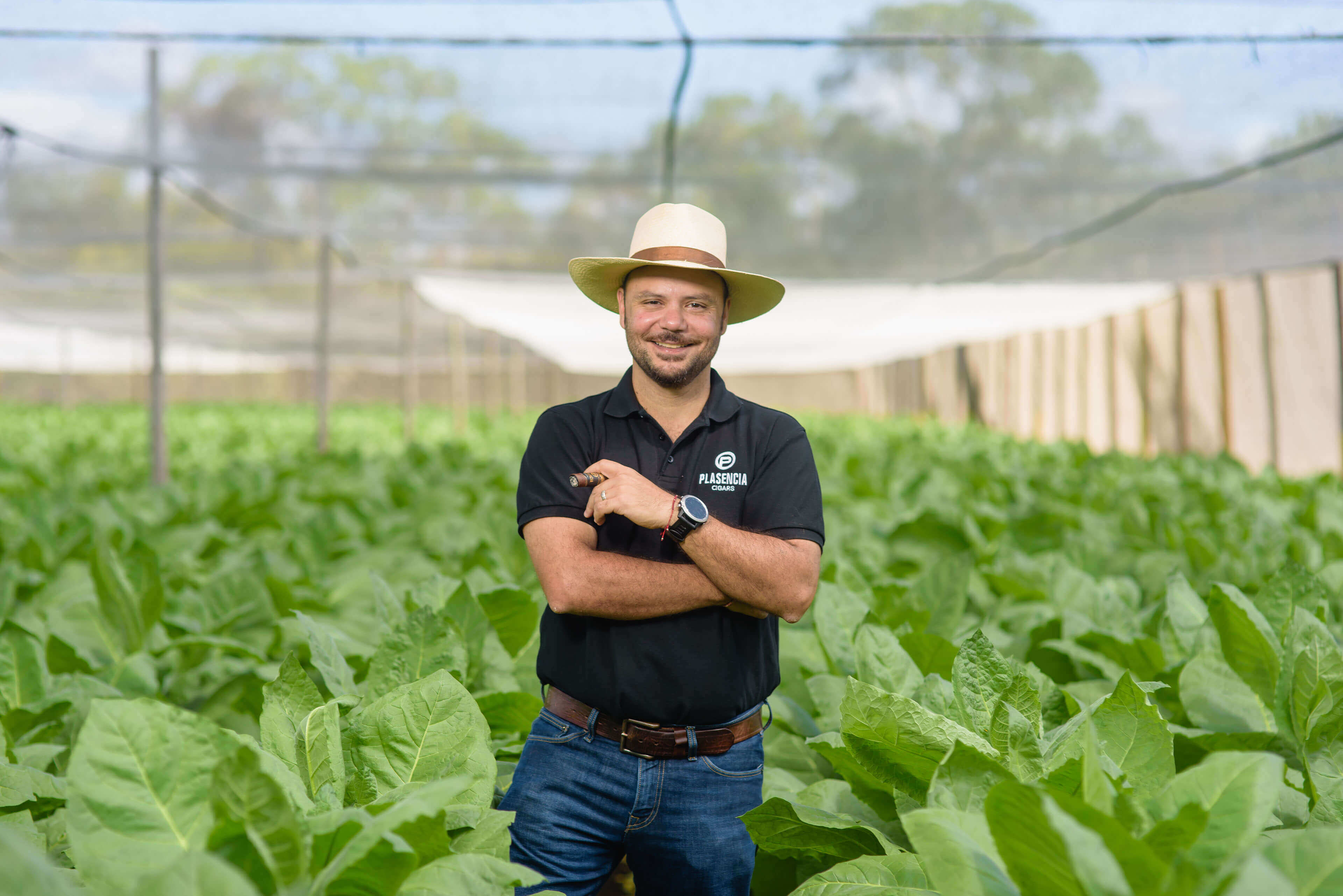 Nestor Andrés Plasencia is a fifth generation grower and cigar manufacturer whose family has been in the business for more than 100 years. After decades of providing tobacco for most of the U.S. premium cigar industry, and producing cigars for other clients, Plasencia has finally made a major effort to put out his own brand. Senior editor Gregory Mottola sat down with the 41-year-old to talk about this new chapter in the tobacco family business.

Mottola: When did you start in the family business?
Plasencia: Full time, 1998, all on the farms. I didn’t start working extensively in the factories until 2008. But even in the factory, I never lost track of the farms.

Q: How many acres does the Plasencia family grow in total?
A: About 1,400 acres in Nicaragua and about 1,600 in Honduras. A little bit in some other countries.

Q: With all that tobacco, what percentage of the U.S. premium cigar industry would you estimate uses your leaf?
A: About 70 percent.

Q: That’s a huge number. How does it feel?
A: It feels good that the industry trusts us so much. The responsibility is huge. That’s why we’re always looking to improve our farming. That’s why we keep learning.

Q: You call the new Alma Fuerte brand your first major push to get the Plasencia name out there, but this isn’t the first Plasencia branded cigar, is it?
A: No. The first brand was in 1987. It was just called Plasencia. We started selling it through JR Cigar. It was made in Honduras. Connecticut shade, very mild.

Q: Was it a big brand?
A: We were making 15,000 a day. During the boom, you could find it through JR but Dannemann took the distribution for brick-and-mortar shops. That lasted three years until Dannemann wanted to concentrate on Al Capone.

Q: Did the brand make a lot of money?
A: No, not really. In 2003 we released Plasencia Organica. I’m an agronomist, and I learned a lot about organic vegetable growing. I spoke to my father and we tried to grow tobacco organically. The fertilizer was the biggest challenge. He said no at the beginning. We tried planting organically in Jalapa [Nicaragua]. The yield turned out to be 30 percent less. The trial and error was expensive. Organica was distributed by Bill Bock who owned Indianhead.

Q: Was Organica a big seller?
A: No. It was a $10 cigar. But you have to get behind a brand. You have to support it. Bill Bock wasn’t getting behind it too much and we didn’t give it the attention it needed either. Then Ventura distributed it. It’s still around.

Q: Being a grower and manufacturer, did you always want to have a brand?
A: Yes. It’s your name. It represents the presence that you have in the industry. Everyone in the industry knows us, but we were missing the connection with the consumer.

Q: What makes your new Alma Fuerte brand different than your previous attempts?
A: We started collecting this tobacco years ago, selecting high-quality leaves for something special. Our biggest strength is our farming. Our seeds and tobacco are of high quality because of our organic methods. And we take the time to age and select our tobaccos. Alma Fuerte has more aged tobacco. And we took a lot more time to create the blends, plus, a much bigger investment in the packaging. Our tobacco in general is much better than it was.

Q: You say you’re an agronomist but you also say that brands need support. Won’t Alma Fuerte take you away from your duties on the farm and vice versa?
A: No. I will be on the farm, but I have my brothers who are also there. I’ll travel to the U.S. when necessary, however, I don’t want the brand to depend on my presence at events. The cigar should be able to stand on its own.

Q: What did your father say about starting a new brand and distribution company?
A: He said yes because he believes that now we have the capacity to do it right.

Q: You recently released Alma Fuerte. Talk about that.
A: We wanted a Nicaraguan puro. That was the first idea. We started with tobaccos that we grew and took secos, visos and ligeros from different fields. We have a blending team from Honduras and Nicaragua and they’re both part of the process. I started putting aside tobaccos nine years ago without really knowing exactly what it would be for.

Q: Do you have enough aged tobacco to sustain the brand?
A: Yes. We put aside tobaccos every year for nine years.

Q: How fast would you like your brand to grow?
A: I’d like to see a 10 percent growth rate per year, but this is a long-term project. There will be more brands in the Alma Series.

Q: How many factories do you have?
A: Three. Two in Honduras and one in Nicaragua.

Q: Won’t your own clients now think you’re in competition with them?
A: I don’t think so. If I have a strong brand in the market, it will help everyone’s brand. Quesada [Fonseca Nicaragua] and Espada by Montecristo say: “made by the Plasencias.” If we do a good job with our own brand, it will benefit everybody who is with us. Also, Alma Fuerte’s price point is much higher than that of other brands. It’s a $20 cigar.

Q: How much tobacco inventory are you sitting on?
A: About 30,000 bales of tobacco. Every year it keeps growing. We have Connecticut tobaccos and all types of Havana seed: Havana 2000, Corojo ’99, Criollo ’98—but it’s our own version of Criollo ’98. Not that it’s genetically enhanced, but cultivated through seed selection for disease resistance.

Q: Are you still developing new strains of tobacco?
A: We don’t know what we can and can’t change due to the FDA. If disease hits and we have to create a new tobacco, it could take years before the FDA approves it.

Q: Alma Fuerte is a new brand and therefore ineligible to be grandfathered now that the FDA regulates the industry. Aren’t you afraid of the expensive approval process?
A: To be honest, yes, I’m a little concerned. We have some predicate blends in terms of origin. Some of the new sizes will, no doubt, be expensive, but we also have the resources to invest—whatever it takes. At this point, we don’t really know what the cost will be, but we have a commitment to do this no matter what.

This article first appeared in the November 1, 2016 issue of Cigar Insider.