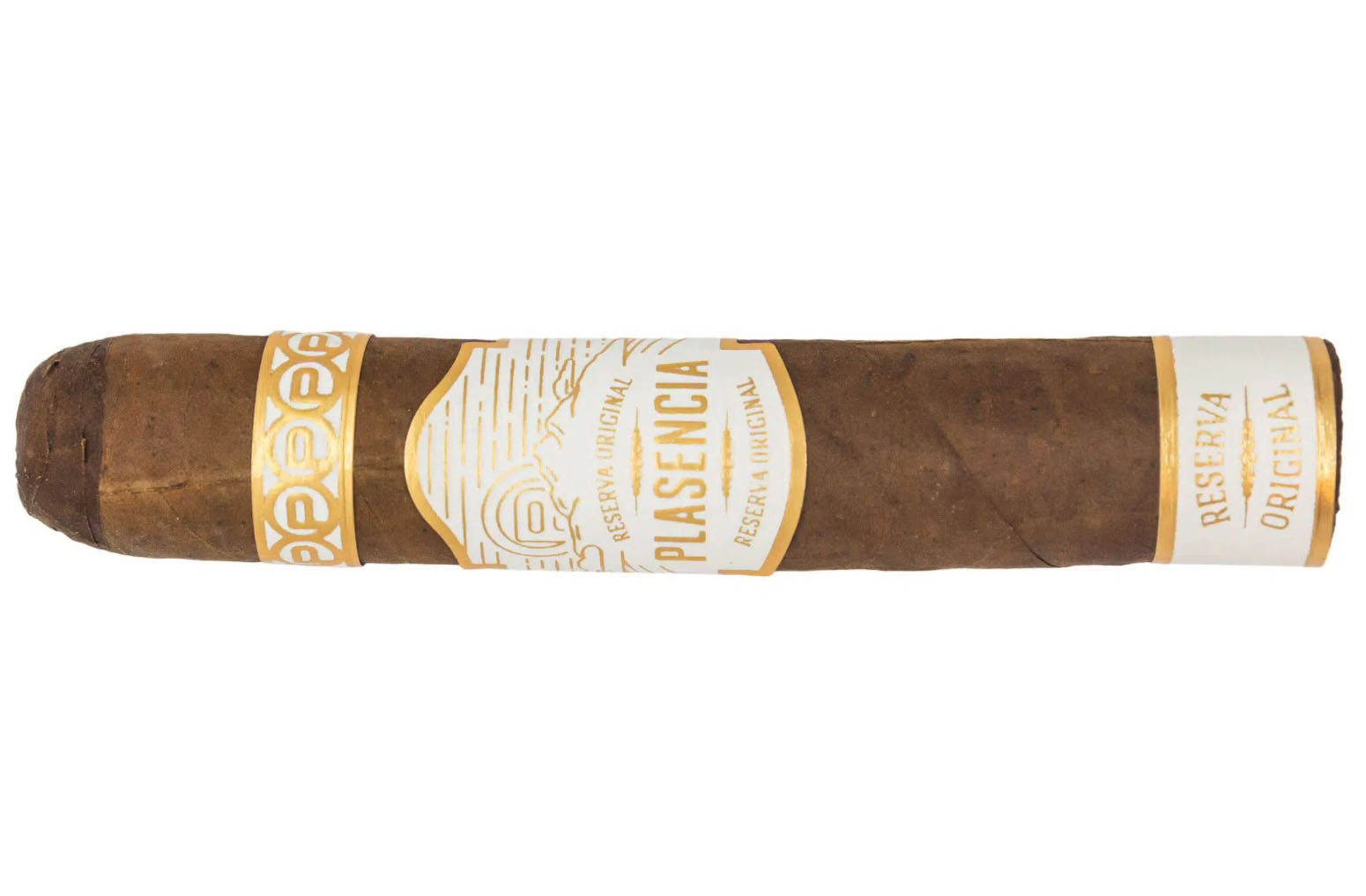 The Plasencia Reserva Original was released nationally in 2017 at the IPCPR trade show after being a Famous Smoke exclusive for some years before. The claim is that this is the first and only cigar on the market made entirely with tobacco certified by the Organic Crop Improvement Association (OCIA) in the same way the Nicarao Indians did this over 500 years prior.

This cigar was reviewed blind (no bands) by a panel of at least 4 reviewers. They did not know what they were smoking beforehand. The scores are an average of all the reviewers’ scores with outliers removed. All of our cigars reviewed are shipped to the panelists with Boveda packs to ensure optimal smoking experience.

“This toothy wrapper, cinnamon in color, is dry to the touch. It is rolled with tight, yet visible, seams and finished with a nice triple cap. Other then a few water spots, I would call this a flawless looking cigar.” –Estevan Z. (TheRealBanzi)

“I get a solid tobacco and barn yard smell.” –Joseph S. (Bearded Bastard)

“Upon lighting the cigar I am greeted by a strong charred wood backbone with undertones of salt and sugar on the sides and tip of my tongue. As we smoke on, further into this third, I’m reminded of freshly baked doughy sourdough biscuit with honey butter. Pushing some smoke through the nose and the sinuses awaken with the tingle of fresh ground cinnamon and a vegetal note that is not easily identified. Finish is medium in length, but only if you retrohale it. Much like the aroma notes I find all of this interesting.” –Estevan Z. (TheRealBanzi)

“This cigar started off with a dry spice. Was not overpowering but it did sit at the back of the throat for a minute to let you know it was there. After the initial dry spice settled in you started to get some cedar and earth. I was also picking up some cherry which was very nice. As the first third was finishing up I started to get some nut flavor which played nice with the initial spice pepper flavor.” –Jake P. (Jake P.)

“A mint jam note joins the fray, as we start this second third, acting as a nice topping to that sourdough biscuit. The mint becomes the main focus, presenting as a fresh mint leave on on both the palate and in the sinuses as I smoke deeper into this third. Digging deeper, into the smoke, we find a cinnamon and cedar undertone that ebbs and flows helping to lengthen the finish. Smoke production is light but the mouth feel is creamy. What smoke that is found is dense. The complexities of this third has my full attention. Definitely the best that this cigar offered.” –Estevan Z. (TheRealBanzi)

“This cigar is quick burning with no issues and evolving in nuances graham cracker with fresh ginger/wasabi when they sit next to each other on your sushi boat.” –Allison T. (The Yoga Ash)

“The final third again played in the earth flavors. At times I did get a bit of a pine or mint kick, which was a nice was to break up the earth flavor.” –Jake P. (Jake P.)

“The ash all throughout this cigar has stacked nicely without falling to easily. The notes the last third were very surprising as a nice smoked ancho chili with the fresh ginger with nuttiness to finish it off.” –Allison T. (The Yoga Ash)

“If I had a complaint, with this cigar, it would be it’s draw. It took two cuts to get an “ok” draw. Sadly, “ok” was still to tight for my liking.” –Estevan Z. (TheRealBanzi)

“This cigar had a very bright white ash, fairly even burn, no touch ups needed throughout the entire experience.” –Joseph S. (Bearded Bastard)

“This cigar was made for an excellent experience, nothing was needed extra cause it was constructed well.” –Allison T. (The Yoga Ash)

“This was a good medium strength smoke, heavy salt flavors, fairly strong white ash. Only real issues I had were the draw was slightly tight, and it burned real hot, had to smoke slower than usual to keep it from getting too hot. Other than that, a solid good cigar.” –Joseph S. (Bearded Bastard)

“You can call this the energizer bunny of cigars. It kept going and going. I would set it down, for minutes at a time, and could come back to it without a concern. So many change ups throughout it’s 4+ inches. This would make the perfect coffee cigar, IMO. Should pair with just about any style of coffee. Easily, the best way to kill an hour before or after work. I love this size and format…Someone sell me box!” –Estevan Z. (TheRealBanzi)

“The beginning of this cigar had you really paying attention. If you didn’t you may have missed some really nice flavor changes like when it decided to toss cherry at you. Besides the cherry in the first third this cigar was on the earth side of flavors. If you are a fan of the earth profile this would be a smoke for you.” –Jake P. (Jake P.)

“This was a delight to smoke with its note changes that really compliment each other & excellent construction… It was truly great to sit back in the sun and enjoy the experience instead of tending to the cigar.” –Allison T. (The Yoga Ash)

To view the complete scores and notes, click here.

SUMMARY
“This was a delight to smoke with its note changes that really compliment each other & excellent construction… It was truly great to sit back in the sun & enjoy the experience instead of tending to the cigar. ” –Allison T. (The Yoga Ash)
Source: https://blindmanspuff.com/blind-cigar-review-plasencia-reserva-original-robusto/